Synopsis:
Yesterday’s forecast remains on track for today as we put last week’s heat wave behind us and trend cooler/wetter. Looking at the big picture, the summer ridge is building into west TX, while a trough continues to mature off the CA coast. The resulting southerly flow will allow moisture/cloud cover to stream north into AZ while also promoting a downward trend in temperatures through Thursday. This low grade Monsoon pattern should also allow for an uptick in storm activity area wide later tonight before peaking into Wednesday morning. We expect rainfall totals to remain on the lower end with the focus instead on possible gusty outflow winds, localized blowing dust, and lightning. Moving ahead, this pattern should break down later in the work week with another warm up likely on the way.

For today plan on mostly sunny skies for a few more hours before increasing mid and high clouds (overcast skies). Afternoon temperatures will still warm into the 105˚F-107˚F range around the Valley. South/southwest winds will be breezy in the 7-14mph range with localized gusts in 20-30mph range possible later this evening. As highlighted above, light showers will overspread the region from south to north into tonight with some light rain/sprinkles and gusty winds.

For tomorrow plan on continuing shower/storm chances through the morning hours. Any stronger storms that form would be capable of brief downpours, gusty winds, and lightning. Otherwise daytime highs should slowly climb into the 103˚F-105˚F range around the Valley. Pending on how active the morning is we could see another round of afternoon showers/storms before conditions begin to clear by evening. Heading into Thursday, plan on a return to mainly sunny skies with highs reaching around the 106˚F mark. Lingering storm activity should remain focused across the higher terrain areas of northern and eastern AZ. We’ll have more on this tomorrow. 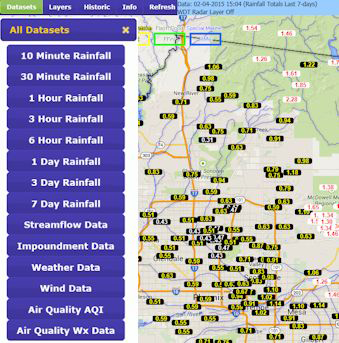