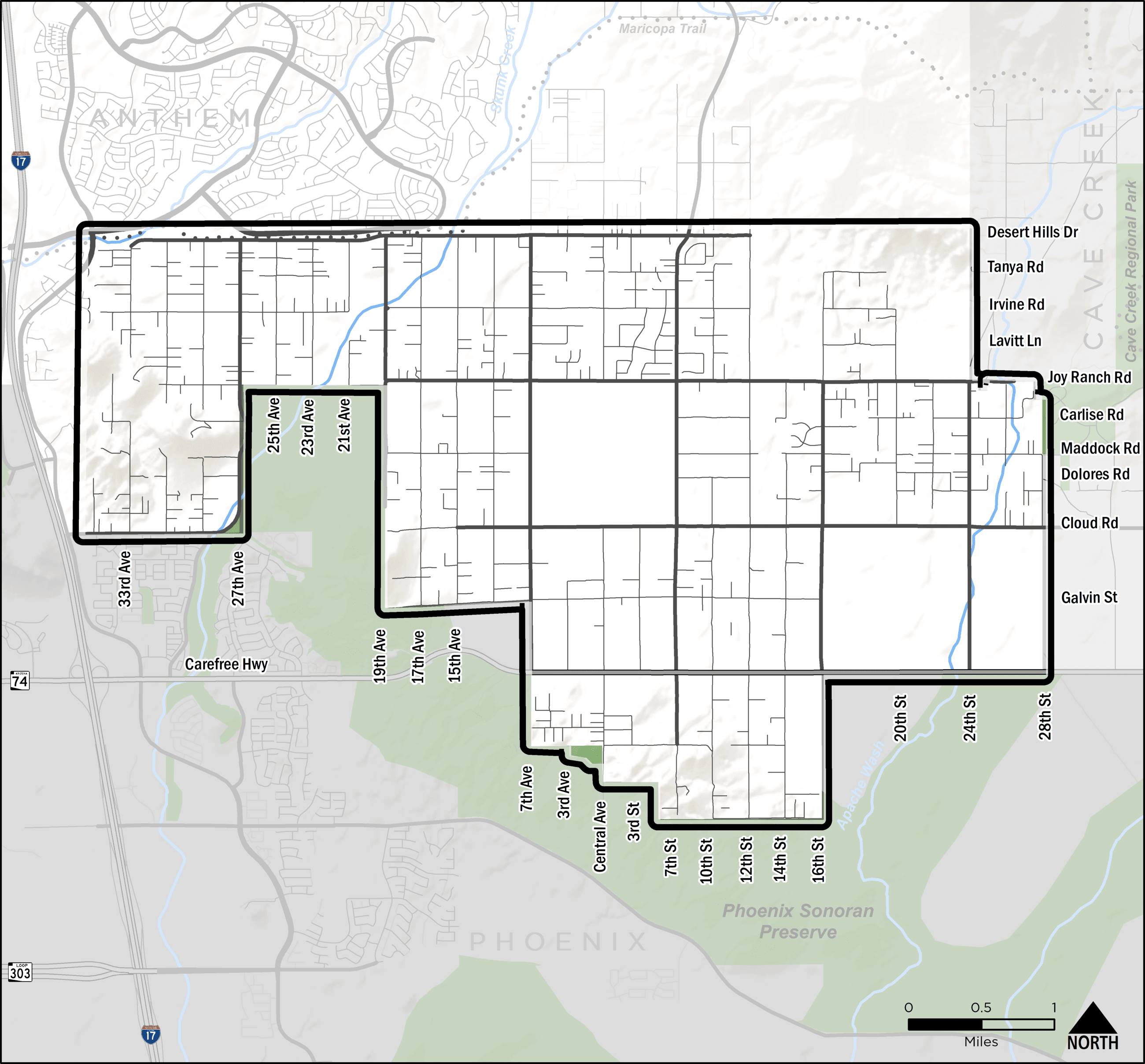 Thank you for your interest in MCDOT’s Desert Hills Area Transportation Study.

The purpose of the Desert Hills Area Transportation Study (ATS) is to evaluate the existing and future roadway systems to determine gaps in connectivity for roadway users. Those gaps can lead to access issues to and from properties and services. Recent emergency events in the area have resulted in concerns by residents on accessibility options in the Desert Hills area.

The following key project issues and challenges have been identified:

Tell us what you think 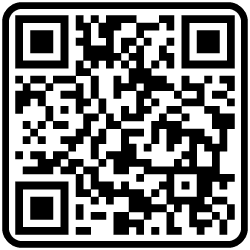 nt to hear from you. Tell us your thoughts about the Desert Hills Area Transportation Study. Visit mcdot.me/DesertHillsSurvey or scan the adjacent QR code to fill out a brief survey and help us get a better understanding of the roadway needs in the Desert Hills study area.

If you would like to speak with someone directly regarding this area transportation study, please contact Jessica Brinton, Project Manager, by phone at (602) 506-4178 or by email at Jessica.Brinton@maricopa.gov.

The study area is generally bounded by Desert Hills Drive to the north, 35th Avenue to the west, Dove Valley Road to the south, and 28th Street to the east as shown in the map, and includes approximately 18 square miles of unincorporated land in northern Maricopa County. The study area is adjacent to the City of Phoenix Municipal Limits to the south, the Town of Cave Creek Municipal Limits to the east, and the suburban master planned community of Anthem to the north.

The area is predominantly rural in nature with large lot single family residential nestled between surrounding mountains and buttes. Additional areas of influence for the study area include Carefree Highway from 7th Avenue west to I-17 and Gavilan Peak Parkway from Carefree Highway north to the Desert Hills Drive alignment. 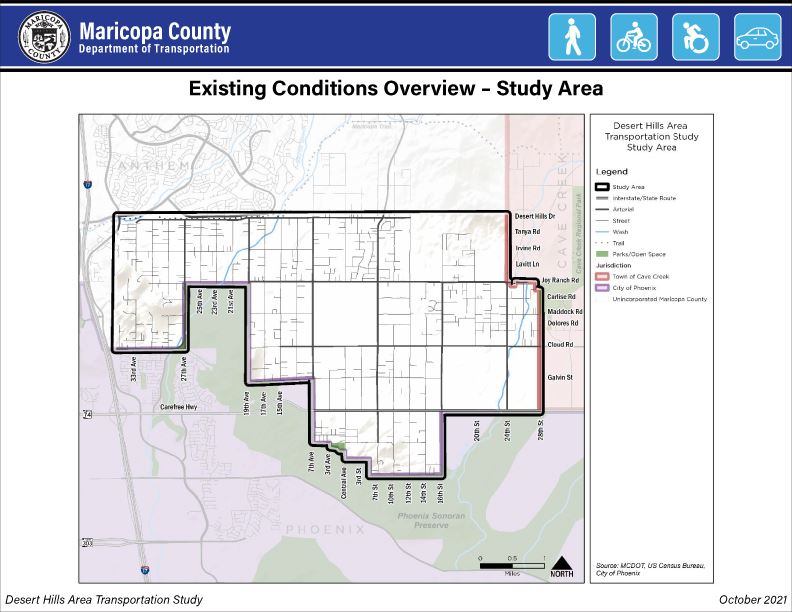 The majority of the land is under private ownership. Arizona State Land Department (ASLD) ownership and management is clustered in the central and eastern portions of the study area. A singular Bureau of Land Management (BLM) parcel exists adjacent to the Apache Wash just south of Carlise Road in close proximity to the eastern boundary of the study area near the Town of Cave Creek. 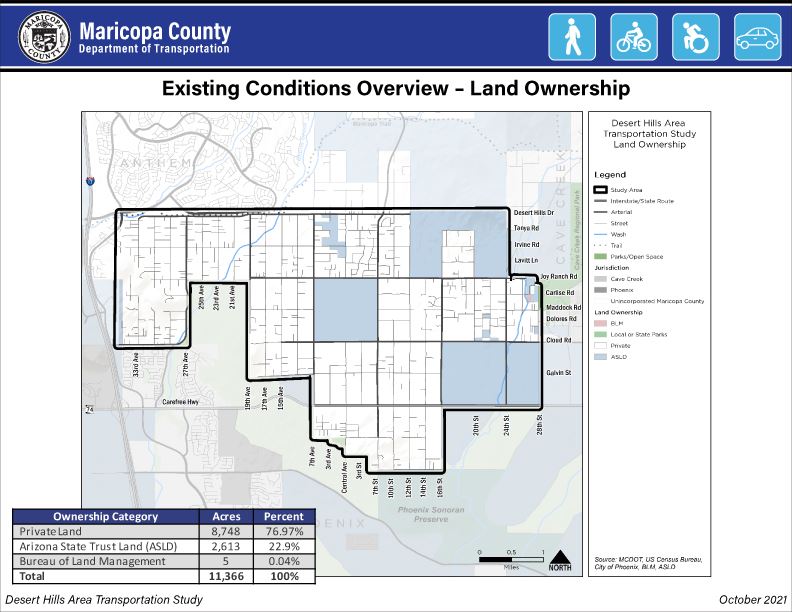 The majority of the study area is comprised of low-density single family residential land uses, followed by vacant land that has yet to be developed, particularly in the south and west portions of the study area. Small clusters of commercial land uses exist along 15th Avenue, 7th Avenue, and Carefree Highway. The largest public employment use is Desert Mountain Middle School, which is part of the Deer Valley Unified School District, located on 7th Avenue south of Cloud Road. 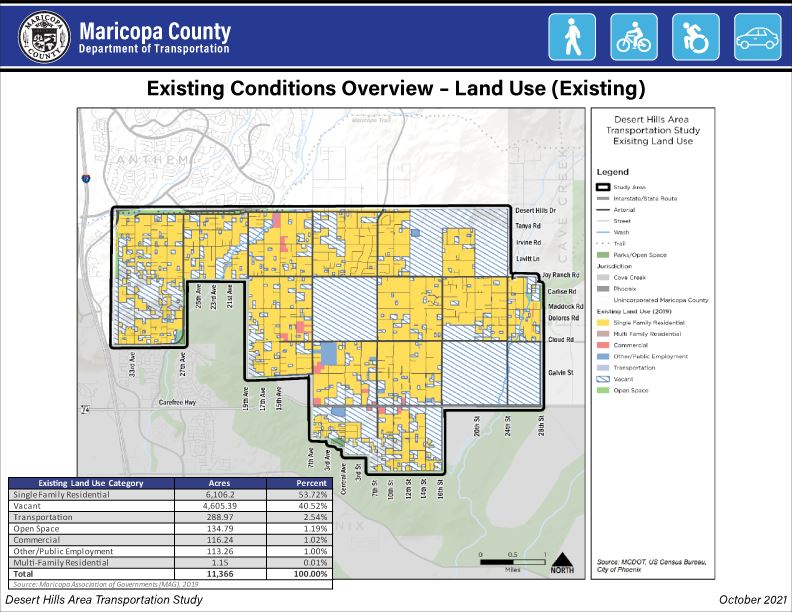 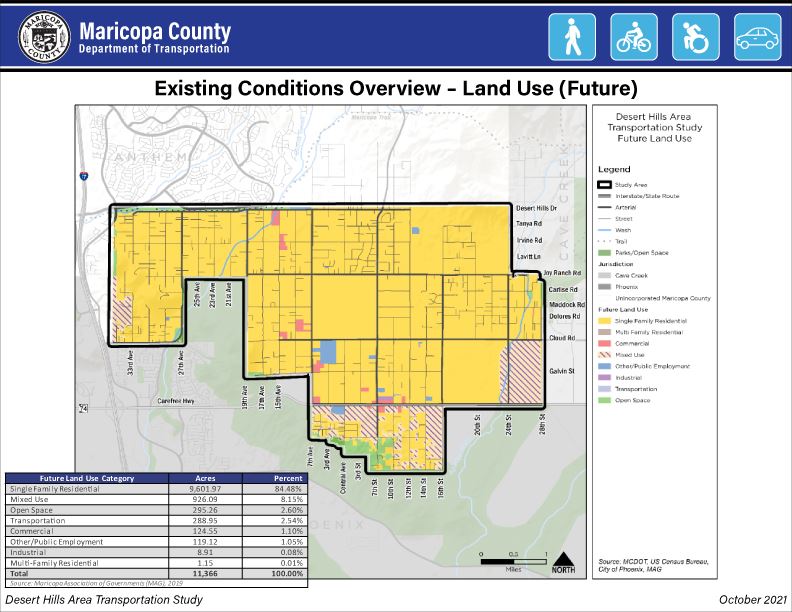 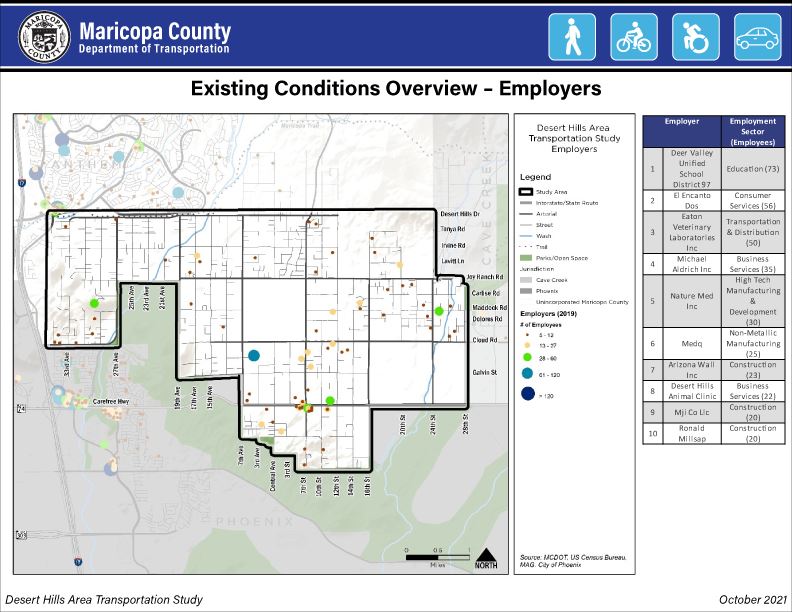 A total of 17,771 people live in 6,041 households within the study area. The maps below show the population density and the household density.

The lower population density and magnitude of employment coupled with the higher than average seasonal vacancy could limit the need for adding capacity of roadways and could likely result in targeted connections near areas of employment and clusters of households. 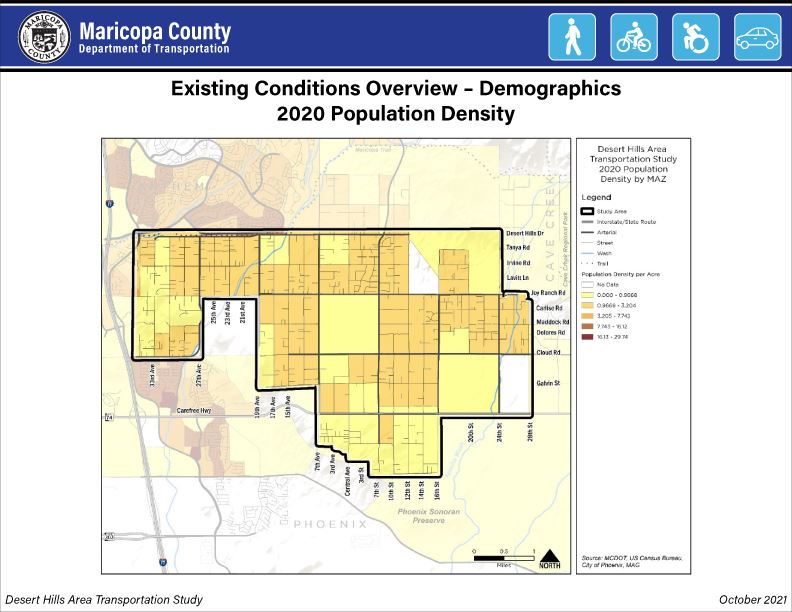 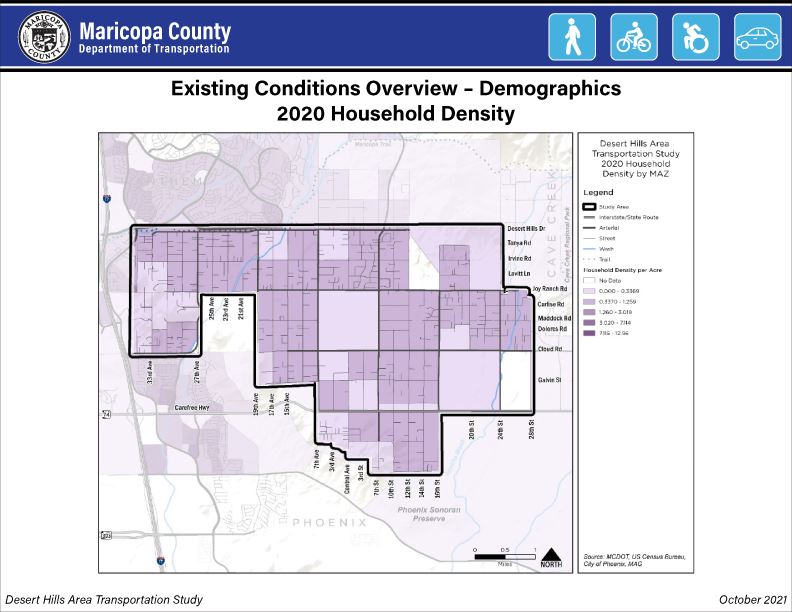 Reviewing future population and employment provides insight on changes in future travel demand and informs solutions. The graph shows the projected increase in population, households, and employment within the study area between 2020 and 2040, the planning horizon for this study.

With the majority of the study area being predominantly residential, employment is expected to stay relatively the same from 2020-2040 with a greater concentration around the intersection of Carefree Highway and 7th Street, as shown in the maps. Population density is expected to grow conservatively as remaining vacant land in the southern portions of the study area become developed by 2040. The large activity center at Carefree Highway and I-17 is expected to develop further with greater concentrations of employment and residential density by 2040. 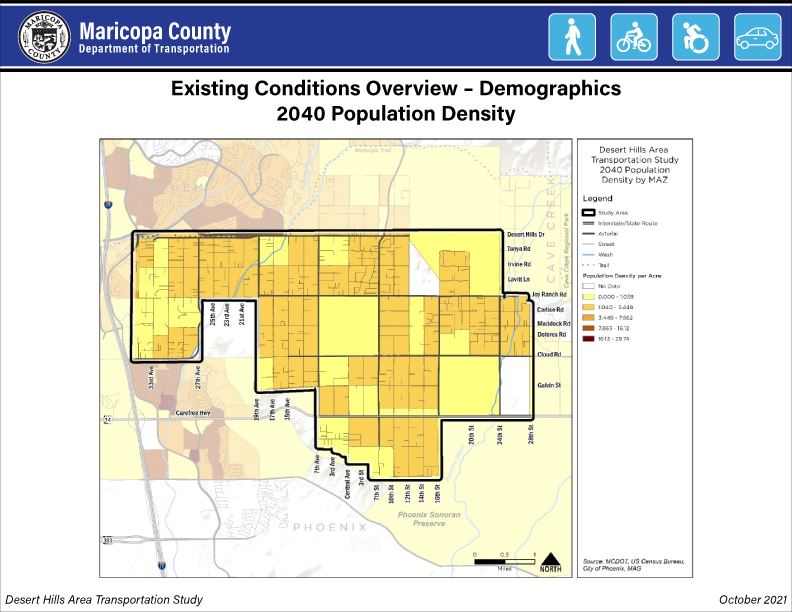 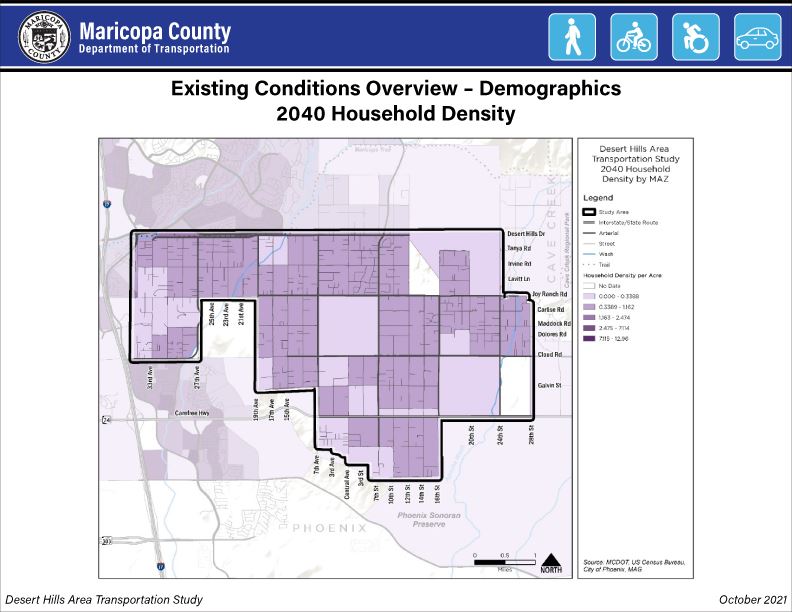 MCDOT owns and maintains approximately 66.25 centerline miles of arterial and collector roadways within the study area as illustrated in the map. 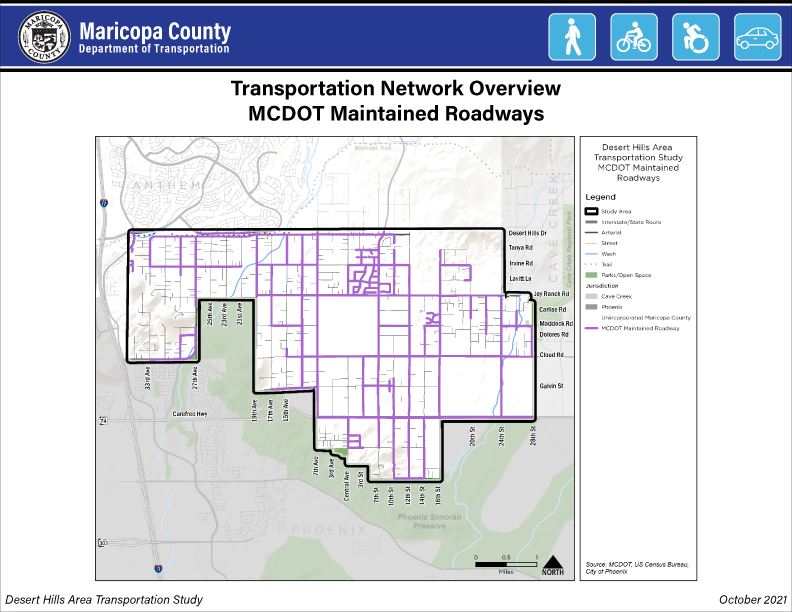 All MCDOT roads in the study area are paved based on the Road Information Tool, with the exception of a small quarter-mile segment of Dove Valley Road between 12th Street and 14th Street, as shown in the map. All other roads not maintained by MCDOT are predominately unpaved and ungraded. 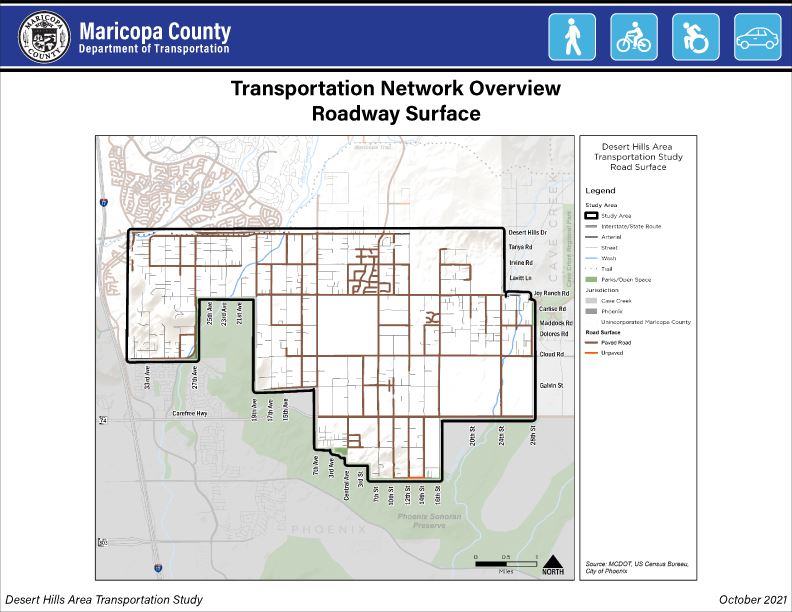 Pedestrian Facilities
Due to the prominence of the large lot, low density rural character of the study area, the majority of the roadways in study area do not have sidewalks, as is standard for rural communities. The only exception is Cloud Road from 35th Avenue to Skunk Creek and select segments of sidewalks at the intersections of Carefree Highway with 7th Street, 16th Street and 24th Street. As a result, many multimodal travel users resort to using the shoulders as their preferred throughfare space.

There is also a limited number of striped crosswalks in the study area. The only crosswalks are along Carefree Highway at 7th Avenue, 7th Street, 16th Street, and 24th Street; and one other mid-block crosswalk on 7th Street about 1,500 feet south of Cloud Road which serves Stepping Stones Academy.

Bike Facilities
The study area has almost no bicycle infrastructure apart from Carefree Highway which has designation as a regional Bike Route. No other interior roadways in the study area contain bike facilities which again is typical of low density, large lot residential communities. Surrounding arterial roadways to the northwest in Anthem and southwest of the study area have painted bike lanes inclusive of Gavilan Peak Parkway, Dove Valley Road, 27th Drive south of Carefree Highway, and North Valley Parkway. As a result, bicyclists tend to utilize the shoulders as their preferred throughfare space within the study area. 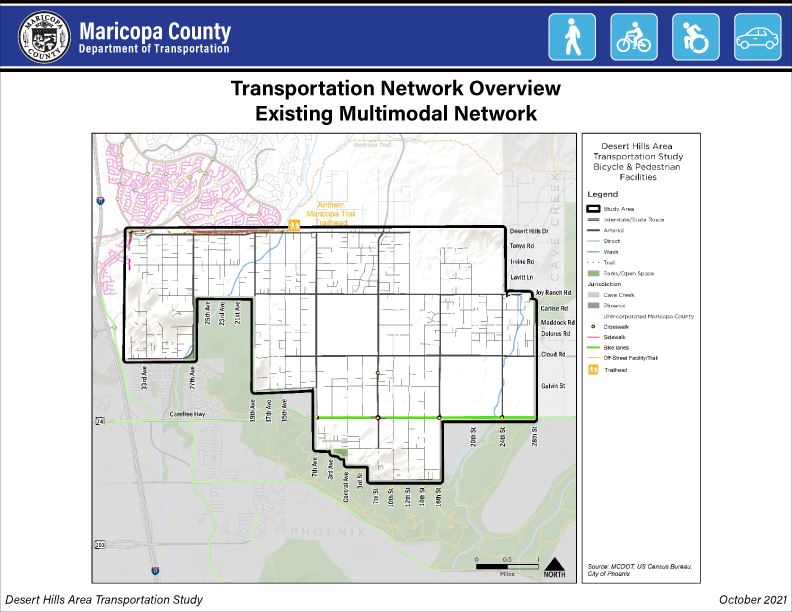 Crash data was collected to assess trends, patterns, predominant crash types, and high crash locations. The crash data collected for this study was for a five-year period, from January 2015 to December 2019. The crash data was obtained from the ADOT Safety Data Mart. The map depicts crashes in the study area within the analysis period.

During the five-year analysis period, a total of 311 crashes occurred, fairly dispersed throughout the study area. The area with the highest concentration of crashes includes Carefree Highway between 16th Street and 7th Avenue and on 27th Avenue between Cloud Road and Desert Hills Drive.

The pie chart shows the percentage of crashes that occurred during the five-year study period by injury severity. 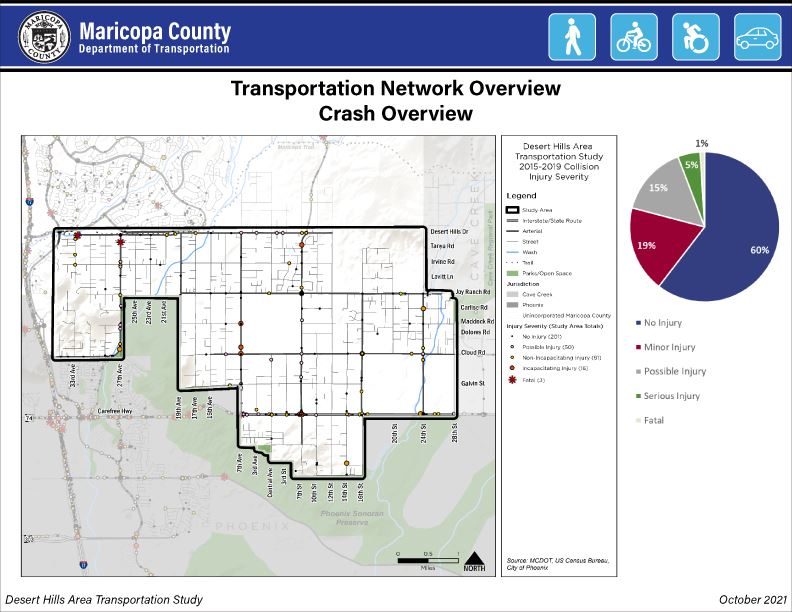